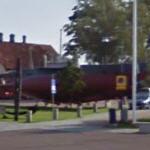 By kjfitz @ 2010-02-16 10:27:22
@ 56.160693, 15.598383
Karlskrona, Sweden (SE)
The Hajen (Shark) was the first submarine of the Royal Swedish Navy. She is a small submarine of the Holland type, constructed by the Swedish navy engineer Carl Richson who had previously studied J.P Holland’s submarine designs in the U.S. In 1909 two additional submarines were launched and the Hajen is thereafter known as U-boat No. 1.

In 1916 Hajen was modified at Bergsunds Mekaniska Verkstad, Stockholm, Sweden. The Avance engine was replaced by a diesel motor. She was also fitted with a deck platform and fore ship. Hajen was decommissioned in 1922. She was then stripped of machinery and the complete inside fitting. Until 1932 she was moored and used for depot duties.

The Hajen is today exhibited on land by the Naval Museum in Karlskrona. She was included into the museums collections already in 1932. The submarine is today presented with the same exterior as it had after the modification in 1916.
Links: www.hnsa.org
596 views