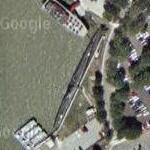 By kjfitz @ 2005-08-28 16:05:01
@ 41.51004, -81.691643
Cleveland, Ohio (OH), US
Operating from Australian ports during World War II, Cod received a battle star for each of her seven war patrols, and sank nearly 27,000 tons of Japanese shipping, including the destroyer Karukaya. As a participant in Project 3, Cod carried a Navy cameraman aboard during her last war patrol. The resulting color film footage included a desperate attempt to rescue the Dutch submarine O-19 which grounded on Ladd Reef. When towing attempts failed, Cod took the Dutch crew aboard and destroyed O-19 with explosive charges, torpedoes and gunfire. Other film highlights include sinking enemy vessels and the recovery of a lost boarding party that became stranded aboard a junk for two days when Cod was forced to submerge by attacking enemy aircraft.

In 1952, Cod participated in joint U.S. and Canadian naval exercises in the Atlantic and Caribbean. In 1959, she was designated the Naval Reserve training ship for Cleveland and later arrived at her new home as a member of the Navy's Operation Inland Seas. Cod was in the first group of naval vessels to transit the newly opened St. Lawrence Seaway. In civilian custody since 1976, she is among the best restored submarines on display. Visitors enter and exit the vessel by using her original hatches and ladders.