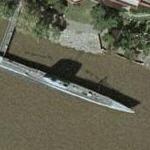 By kjfitz @ 2005-08-28 16:22:19
@ 40.445165, -80.018567
Pittsburgh, Pennsylvania (PA), US
USS Requin was on her way to the western Pacific under the command of submarine ace Commander Slade Deville Cutter when World War II ended. Like most of her Tench-class sisters, Requin did not spend the Cold War in mothballs. Instead, she returned to the shipyard for conversion to a radar picket submarine under Project Migraine. Requin and her sister radar picket subs provided surface battle groups with early warning of enemy air attacks, helped direct friendly air strikes, and provided mid-course guidance for submarine-launched Regulus missiles. In her new role as a submersible radar and control center, Requin's after compartment was filled with state of the art radars, communications gear, and control equipment.

When smaller, lighter, and far more capable airborne radars made the Migraine boats obsolete, Requin returned to the role of attack submarine as a fleet snorkel conversion. The radars were removed from the after compartment but her aft torpedo tubes were not replaced. Instead, the compartment became a large berthing space. In the 1960s, Requin participated in joint ASW exercises with many South American navies and was also deployed to the Mediterranean.

Requin is one of only two surviving Tench class submarines. The other is USS Torsk (SS-423) in Baltimore. She is also the only remaining submarine to have undergone the Migraine conversion. Requin conducts youth group overnight encampments.
Links: www.hnsa.org
847 views