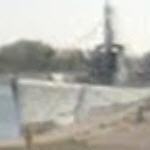 Her keel was laid down on 4 November 1940 by the Mare Island Navy Yard in Vallejo, California. She was launched on 26 August 1941 and commissioned on 15 December 1941.

USS Silversides received twelve battle stars for World War II service, and was awarded the Presidential Unit Citation. She is credited with sinking 23 ships, the third-most of any allied World War II submarine, behind only the USS Tang and USS Tautog. The tonnage of the ships sunk by Silversides amounted to 90,080 tons, second only to the Tang's total. Judged by such standards, Silversides has the most prolific combat record of any still-extant American submarine.

Silversides was used for exterior scenes in the 2002 film, Below to depict the fictional USS Tiger Shark. She was towed in Lake Michigan for filming. The movie was a total flop, earning only $589,000 at the box office and went almost unnoticed to film goers across the globe.
Links: en.wikipedia.org
772 views