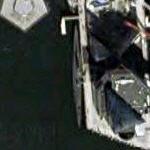 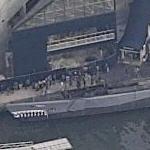 Commissioned on 16 December 1944, USS Torsk was one of only ten Tench Class fleet type submarines to see service in World War II. Deployed to the Pacific in 1945, Torsk made two war patrols off Japan sinking one cargo vessel, and two coastal defense frigates. The latter of these, torpedoed on 14 August 1945, was the last enemy ship sunk by the US Navy in World War II.

Following the end of World War II, Torsk alternated between duties as a training vessel at New London, and active deployments in the Atlantic and Mediterranean. In 1952, the boat underwent a fleet snorkel conversion, and in the mid 1950s received equipment for use in the testing and development of the Regulus missle. In 1960, Torsk received a Presidential Unit Citation for service during the Lebanon Crisis, and in 1962 participated in the Cuban Blockade which earned her the Navy Commendation Medal. Decomissioned on 4 March 1968, with an impressive record of over 10,600 career dives, Torsk arrived in Baltimore to serve as a museum in 1972. She is displayed in Baltimore's Inner Harbor along with Lightship No. 116 and USCGC Taney.
Links: www.hnsa.org
2,807 views