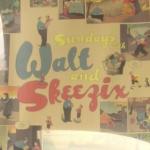 By kjfitz @ 2012-12-19 20:19:09
@ 41.881919, -87.625003
Chicago, Illinois (IL), US
Gasoline Alley is a comic strip created by Frank King and currently distributed by Tribune Media Services. First published November 24, 1918, it is the second longest running comic strip in the US and has received critical accolades for its influential innovations. In addition to inventive color and page design concepts, King introduced real-time continuity to comic strips by showing his characters as they grew to maturity and aged over generations.
Links: en.wikipedia.org
389 views