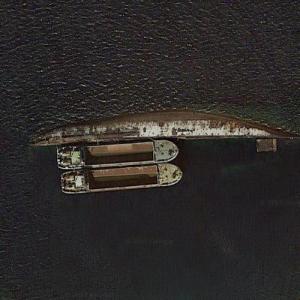 Hinkkanen
@ 2007-02-14 12:56:42
This is the wreck of cruise liner "Rasa Sayang". She was originally Bergensfjord of the Norwegian America Line completed in 1956. She was sold to the French line in 1971 and renamed "De Grasse". In 1973 she was sold again and became "Rasa Sayang". On 17th August 1980, a fire started in the engine room whilst she was under refurbishment at Perama, Greece. She was towed out of the docks and capsized and sank near the island of Kynosoura, some kilometres from Perama.

Anonymous
@ 2010-05-03 19:52:01
My family took the MS Berngesfjord 2 (renamed Rasa Sayang) from New York to Europe (final destination was Denmark) in 1970. I recently met one of the engineers who had worked designing portions of her working in his late 70s at an auto parts store. That ocean line voyage is a memory I will have always and am saddened to see her end up this way.

Anonymous
@ 2017-09-15 17:07:09
My family too the bergensfjord2 from Norway to New York, rode through the tail end of a hurricane and made it safely on that wonderful ship.My memories of that ship will always be cherished. Truly love that old ship