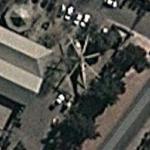 The South African Air Force (SAAF) acquired 16 x SA321L transports on May 1966 which entered service between July 27, 1967 and November 1969. They were used during the counter insurgency fighting with Angola and retired in 1990 when were replaced first by SA330 Puma and later by Oryx.

The helicopter is now painted cream and purple, but the original colors was "Camouflage" when it served in the South African Air Force.
523 views