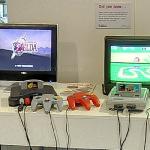 The Nintendo 64, often referred to as N64 (stylized as NINTENDO⁶⁴, and formerly known as the Nintendo Ultra 64) is Nintendo's third home video game console for the international market.
Links: www.museumofcomputing.org.uk
902 views