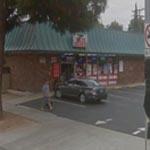 This location was used in the memorable liquor store scene where McLovin armed with his new fake ID tries to buy alcohol for a party.

This is the same parking lot where Jonah Hill's character gets hit by a car driven by a creepy guy named 'Francis' (Joe Lo Truglio.)

Side note: During production of Superbad the liquor store wasn't an actual liquor store like it is now. It was a 7 Days Food Store. Funny how life imitates art.
Links: www.youtube.com
4,312 views