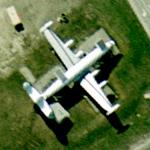 It had been moved to the airport in 1998 for use as a cocktail lounge but the food and service were never quite up to par and the venture failed.
Links: www.roadsideattractions.ca
731 views