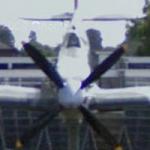 By kjfitz @ 2010-03-12 16:41:29
@ 51.54152, -0.472072
Uxbridge, United Kingdom (GB)
The Supermarine Spitfire is a British single-seat fighter aircraft used by the Royal Air Force and many other Allied countries through the Second World War. The Spitfire continued to be used into the 1950s both as a front line fighter and in secondary roles. It was produced in greater numbers than any other British aircraft and was the only Allied fighter in production throughout the war.
Links: en.wikipedia.org
600 views