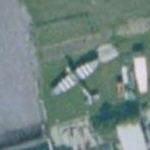 Produced by the Supermarine subsidiary of Vickers-Armstrongs, the Spitfire was designed by the company's Chief Designer R. J. Mitchell, who continued to refine the design until his death from cancer in 1937; the position of chief designer then filled by his colleague, Joseph Smith . Its elliptical wing had a thin cross-section, allowing a higher top speed than the Hawker Hurricane and other contemporary designs; it also resulted in a distinctive appearance, enhancing its overall streamlined features. Much loved by its pilots, the Spitfire saw service during the whole of the Second World War and subsequent years, in all theatres of war, and in many different variants.

The Spitfire will always be compared to its adversary, the Messerschmitt Bf 109; both were among the best of their day.
Links: en.wikipedia.org, www.airliners.net
686 views