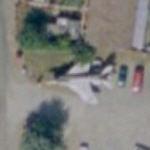 By kjfitz @ 2007-06-22 18:13:18
@ 52.177258, -2.773098
Upper Hill, United Kingdom (GB)
The Supermarine Swift was a British single-seat fighter-jet of the Royal Air Force (RAF), built by Supermarine during the 1950s. After a protracted development period, the Swift entered service as an interceptor but due to a spate of accidents, its service life was short although a photo-reconnaissance variant did resolve some of the Swift's teething problems.

the F 4, which included a variable incidence tailplane intended to correct the handling problems that the Swift suffered from.
Links: en.wikipedia.org, www.airliners.net
897 views