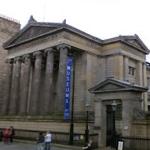 The museum is Scotland's largest medical museum and houses one of the most significant surgical collections in the world. William Henry Playfair’s outstanding pathology museum, constructed 1829–32, is thought to be the oldest museum containing its original collection in the United Kingdom. The neo-classical hall contains human anatomical and pathological specimens from the late 18th century.

Other objects, images and artworks trace surgery’s history from Roman times to the present day and include the discovery of antisepsis and anesthesia, the development of false teeth and the chilling Burke and Hare murders.
Links: museum.rcsed.ac.uk
515 views