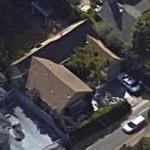 Berman was found murdered, execution style, in this home in December 2000. A friend of Berman's, Robert Durst, was arrested in New Orleans on 14 March 2015 in connection with the murder.
Links: en.wikipedia.org
1,324 views