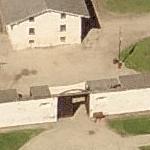 By kkeps @ 2008-10-26 15:34:57
@ 38.572342, -121.471015
Sacramento, California (CA), US
"Sutter's Fort State Historic Park is a state-protected park in Sacramento, California which includes Sutter's Fort and the California State Indian Museum. Begun in 1839 and originally called "New Helvetia" (New Switzerland) by its builder, John Sutter, the fort was a 19th century agricultural and trade colony in California. The fort was the first non-Native American community in the California Central Valley.[ The fort is famous for its association with the Donner Party, the California Gold Rush and the formation of Sacramento. It is notable for it's proximity to the end of the California Trail and Siskiyou Trails for which it served as a waystation. After gold was discovered at Sutters Mill (also owned by Sutter) in Coloma, the fort was abandoned. The adobe structure has been restored to its original condition and is now administered by California State Parks, although threatened with closure. It was designated a National Historic Landmark in 1961."
Links: www.waymarking.com
1,119 views