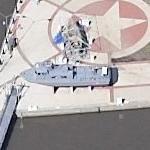 While conducting routine training operations to seeward of Bodega Bay at about 2200, Thursday, 18 December 1969, a training incident occured resulting in the sinking of PCF 8 and the grounding of PCF 1. There were no serious personnel casualties. (1969 Classified Command History entry of the Naval Inshore Operations Training Center, Mare Island, CA) story

- Boat was discovered in Panama, in the fall of 1994, and rescued from the scrap heap by numerous ex-swiftees. The boat was restored and transported to Norfolk, VA, where it was used during the "Last River Run" reunion, at the Washington Navy Yard, June 1995. At that ceremony it was donated to the Washington Navy Yard Museum, Washington, D.C., for permanent display.

- At 10am, 18 April 1998, PCF-1 was moved to its new permanent location, on a set of concrete pedestals at the far end of the seawall, along the Anacostia River, forward of where the USS Barry is berthed. Her bow faces towards the river.....within a few feet of the water's edge. The forward pedestal gives the boat a slight upward tilt. The space itself, where the boat rests, is surfaced in a pattern of bricks, in a semi-circle, interspersed with a pattern of white concrete. It gives the area a sense of permanence, focus, and dignity.

- At a ceremony held at 9am, 23 April 1998, PCF-1 was rededicated with a plaque placed on the forward pedestal of her stand. She is still "Coronado" gray, but a check from the Swift Boat Sailors Association was presented to William L. Ball III, former Secretary of the Navy, to ensure that she gets painted in her battle-gray colors. It is curious that she is one of the few swifts that never wore those colors, as she never saw the sun set over Vietnam.
Links: swiftboats.net
930 views