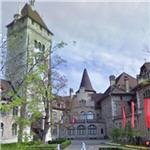 By kjfitz @ 2010-07-27 15:38:07
@ 47.378553, 8.540843
Zürich, Switzerland (CH)
The Swiss National Museum (German: Landesmuseum) — part of the Musée Suisse Group, itself affiliated with the Federal Office of Culture — is one of the most important art museums of cultural history in Europe and the world. It is located in the city of Zurich, Switzerland's largest city, next to the Hauptbahnhof.

The museum building of 1898 in the historicist style was built by Gustav Gull in the form of the French Renaissance city chateaus. His impressive architecture with dozens of towers, courts and his astonishing park on an island between the rivers Sihl and Limmat has become one of the main sights of the Old City District of Zurich.
Links: en.wikipedia.org
484 views