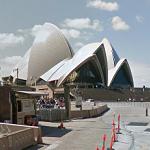 The Sydney Opera House is situated on Bennelong Point in Sydney Harbour, close to the Sydney Harbour Bridge. The building and its surroundings are one of the best known icons of Australia.

As well as many touring theatre, ballet, and musical productions, the Opera House is the home of Opera Australia, the Sydney Theatre Company and the Sydney Symphony. It is administered by the Sydney Opera House Trust, under the New South Wales Ministry of the Arts.
Links: en.wikipedia.org, virtualglobetrotting.com
1,717 views