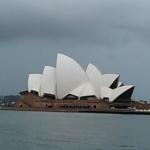 By kjfitz @ 2013-07-13 10:14:34
@ -33.859324, 151.210138
Sydney, Australia (AU)
The Sydney Opera House is a multi-venue performing arts centre in New South Wales, Australia. It was conceived and largely built by Danish architect Jørn Utzon, opening in 1973 after a long gestation that began with his competition-winning design in 1957. The NSW Government, led by Premier Joseph Cahill gave the go-ahead for work to begin in 1958. The government's bold decision to select Utzon's design is often overshadowed by the scandal that followed. It is on Bennelong Point in Sydney Harbour, close to the Sydney Harbour Bridge. It sits at the northeastern tip of the Sydney central business district (the CBD), surrounded on three sides by the harbour (Sydney Cove and Farm Cove) and inland by the Royal Botanic Gardens.
Links: en.wikipedia.org
463 views