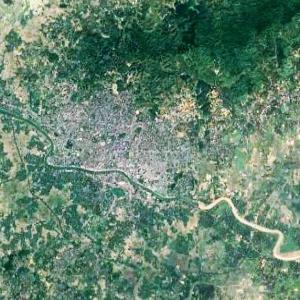 In the City of Sylhet in northeastern Bangladesh along the Surma River it was reported that villagers had waded through streets flooded up to their knees to get food and fresh drinking water.

It is believed up to 100,000 people have been evacuated in the worst-hit districts including Sylhet, and that as many as 4 million people are marooned.

Bangladesh brought in members of its armed services on Friday 17th June 2022 to helps with evacuation of people as the flood water continued to rise. soldiers on Friday to help evacuate people, but Ahmed said he hasn’t seen any yet.

One Sylhet City resident was reported to have said “We are in a great disaster. Neither the Sylhet City Corporation nor anyone else came here to inquire about us,”

Sylhet is a sprawling metropolitan city in northeastern Bangladesh and the administrative Centre of the Sylhet Division. It is one of the largest cities in the country.

It is Sylhet’s location on the north bank of the Surma River which is one of the main reasons for the severity of the flooding.
Links: www.google.com, www.theguardian.com, www.pbs.org
100 views