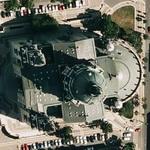 By kjfitz @ 2005-11-17 12:21:08
@ 47.500757, 19.053962
Budapest, Hungary (HU)
The Saint Stephen basilica is the largest church in Hungary. It was designed by Jozsef Hild in 1845, although it was only finished in 1906, due to some serious construction errors: in 1851 the dome collapsed. The remainder of the church was then demolished and replaced by a neo-Renaissance design by Miklós Ybl. This one is still standing, even though it got heavily damaged during World War II.

The interior of the basilica is a tad dark, but still light enough to admire the many decorations. No amount of gold leaf has been spared. Among the most valued sights within the church are the relics of St. Stephen. In the Szent jobb kápolna (chapel of the Sacred Right) you can find a piece of his skull, and in the church itself the most sacred relic in all of Hungary is on display in a golden display case: the mummified hand of Stephan. A bit grisly, but very fascinating.
773 views