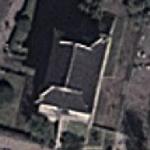 By Mike1989 @ 2013-02-27 11:08:57
@ 39.022599, 125.756845
Pyongyang, Democratic People's Republic of Korea (KP)
Taedong Gate is the eastern gate of the inner castle of the walled city of Pyongyang (Pyongyang Castle), and one of the National Treasures of North Korea. Located on the banks of the Taedong River, from which it gets its name, the gate was originally built in the sixth century as an official Koguryo construction, and, along with the Ryongwang Pavilion and Pyongyang Bell, served as the center of the inner castle's eastern defenses.The present construction dates from 1635, however, as the original was burnt to the ground during the Imjin wars of the late 16th century.
Links: en.wikipedia.org
470 views