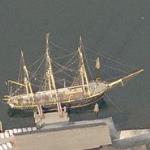 Villiers saved Georg Stage from the scrappers and renamed the ship in honor of famed sea author Joseph Conrad. Villiers planned a circumnavigation with a crew of mostly boys. Conrad started from Ipswich on October 22, 1934, crossed the Atlantic Ocean to New York City, then down to Rio de Janeiro, Cape Town, and across the Indian Ocean and through the East Indies. After stops in Sydney, New Zealand, and Tahiti, Conrad rounded Cape Horn and returned to New York on October 16, 1936, having travelled a total of some 57,000 miles.

Villiers was broke as a result of the expedition (although he did get two books out of the episode - Cruise of the "Conrad" and Stormalong), and sold the ship to George Huntington Hartford, who added an engine and used her as a yacht. In 1939 he transferred the vessel to the Maritime Commission, who used her for training until 1945. After being laid up for two years, the ship was transferred to Mystic Seaport.

In addition to her role as a museum, she is also a static training vessel.
Links: en.wikipedia.org
870 views