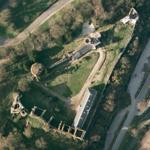 By dda @ 2008-01-19 08:15:10
@ 49.484179, .46406
Tancarville, France (FR)
From the beginning of the 12th century, Tancarville castle was the seat of one of the most powerful lineages of the Pays de Caux during the ducal epoch, ie that of the Chamberlains of Normandy. This family, grand officers of the crown, was already a landowner in the Lillebonne region towards the middle of the 11th century. It was only after 1100 that they took the name of Tancarville and that the castle appeared for the first time in texts.

The castle was located on the extremity of a triangular spur, detached from the hillsides of the Seine. A large deep ditch separated it from the plateau. From the ducal epoch remains an enormous motte with the ruins of a large 15th century tower (the “Grosse-tour”), possibly some parts of masonry visible in the toothing stones at the south-eastern angle of the tower, and finally an imposing 12th century residential tower – known as the “Tour-carrée” (square tower), which stands at the north-western angle of the enceinte. Looking at the rest of the ensemble, the essential medieval sections are of reconstruction from the end of the 14th and beginning of the 15th centuries.
Links: fr.wikipedia.org
764 views