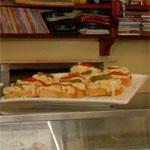 By jbottero @ 2013-04-14 13:15:37
@ 40.42863, -3.669973
Madrid, Spain (ES)
The serving of tapas is designed to encourage conversation because people are not so focused upon eating an entire meal that is set before them. According to The Joy of Cooking, the original tapas were the slices of bread or meat which sherry drinkers in Andalusian taverns used to cover their glasses between sips. This was a practical measure meant to prevent fruit flies from hovering over the sweet sherry (see below for more explanations). The meat used to cover the sherry was normally ham or chorizo, which are both very salty and activate thirst. Because of this, bartenders and restaurant owners began creating a variety of snacks to serve with sherry, thus increasing their alcohol sales. The tapas eventually became as important as the sherry.
Links: en.wikipedia.org
326 views