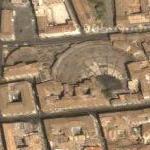 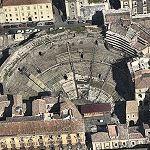 By kjfitz @ 2005-06-28 00:32:59
@ 37.502561, 15.083327
Catania, Italy (IT)
The current layout of the theatre goes back to the Roman Age. But it is possible that it was built on a older Greek site whose existence is only told in literature (Speech of Alcibiade addressing the people of Catania during the Peloponnese War). It was made of lava stone, while seats were of white limestone or marble (for important people), and had a capacity of up to 7000 spectators. In the Norman time, the theatre was largely despoiled of its marble that was re-used to build the Cathedral.
Links: it.wikipedia.org
613 views