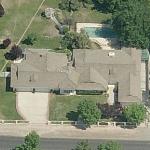 By jdubble07 @ 2011-03-01 14:40:03
@ 36.16289728, -115.1745921
Las Vegas, Nevada (NV), US
Ted Binion was a wealthy U.S. gambling executive and one of the sons of famed Las Vegas casino magnate Lester Ben "Benny" Binion, owner of Binion's Horseshoe. His death has been a subject of controversy; girlfriend Sandra Murphy and her lover Rick Tabish were initially charged and convicted in Binion's death, but were later granted a new trial and acquitted on the murder charges.

Ted Binion was found dead on a small mattress on the floor of his Las Vegas estate home, 2408 Palomino Lane near Rancho Drive and Charleston Boulevard, on September 17, 1998. Empty pill bottles were found near the body, and an autopsy and toxicology report revealed that he died of a lethal dosage combination of the prescription sedative Xanax and heroin, with traces of Valium. The day before, Binion had himself purchased 12 pieces of tar heroin from a street drug dealer, and had earlier gotten a prescription from his next-door neighbor, a doctor, for Xanax, and evidence introduced at trial showed that Binion personally took the prescription to be filled at a local pharmacy.
Links: en.wikipedia.org
6,611 views