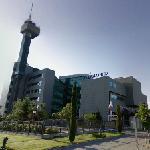 By Mike1989 @ 2013-04-09 04:37:54
@ 40.397678, -3.789077
Pozuelo de Alarcón, Spain (ES)
Telemadrid is the first autonomous public television station of Madrid and the fifth national station, after those of Catalonia, Euskadi, Galicia and Andalusia. It is affiliated with FORTA since its inception, and it is a public channel that belongs exclusively to the autonomous government of Madrid. It began its broadcast on May 2, 1989, in Madrid. Since then, the programming has been dominated by educational programs directed towards the population of that region. Since Madrid is the capital of the country, it puts special emphasis on national political information. As with many other autonomous Spanish networks, Telemadrid suffered greatly during the Spanish financial crisis and requested €88m from the Spanish government to prevent it from becoming bankrupt.
Links: en.wikipedia.org
1,061 views