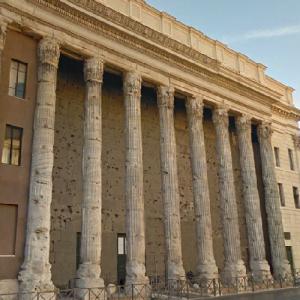 The temple became a ruin when the Roman Empire fell and most of it was demolished to make room for new buildings. However, one wall of the cella survives together with eleven of the 15-metre tall Corinthian colums that surrounded the outside of the temple. Originally there were 15 columns left, but 4 have been lost due to construction.

Today the temple is located on Piazza di Pietra and used as a bank. The bank building has used the temple's facde as part of its own structure.