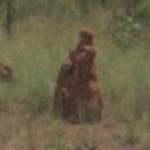 In tropical savannas the mounds may be very large, with an extreme of 9 metres (30 ft) high in the case of large conical mounds constructed by some Macrotermes species in well-wooded areas in Africa. Two to three metres, however, would be typical for the largest mounds in most savannas. The shape ranges from somewhat amorphous domes or cones usually covered in grass and/or woody shrubs, to sculptured hard earth mounds, or a mixture of the two. Despite the irregular mound shapes, the different species in an area can usually be identified by simply looking at the mounds.
Links: en.wikipedia.org
376 views