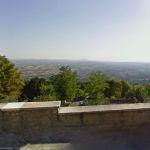 The town occupies the site of the ancient Cingulum, a town of Picenum, founded and strongly fortified by Julius Caesar's lieutenant Titus Labienus (probably on the site of an earlier village) in 63 BCE at his own expense. Its lofty position (c. 650 m) made it of some importance in the civil wars, but otherwise little is heard of it. Under the Roman Empire it was a municipium.

The Gothic church of S. Esuperanzio contains interesting works of art. Cingoli is also known as the "Balcony of Marche" ("Il Balcone delle Marche" because of its belvedere from which, on a clear day, the sight may encompass all of the Marche and further across the Adriatic Sea to the Croatian mountain tops.
Links: en.wikipedia.org
525 views