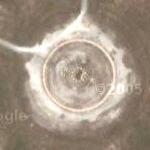 This complex was constructed for the Snark winged missile program, and may have supported some Matador combat training launches in the 1950s. The Air Force accepted the sites in 1953, and the complexes continued to support Snark launches through 5 December 1960. The pad served as a helicopter pad for the Mercury manned program in the early 1960s, and supported tethered aerostat (balloon) programs from 1983 through 1989.
Links: www2.acc.af.mil
1,321 views