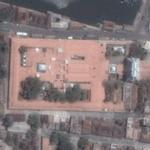 By adrbr @ 2009-03-21 11:18:23
@ 8.155037, 77.465206
Suchindram, India (IN)
The temple is an architectural marvel known for its quality of workmanship in stone. The musical pillars carved out of single stone and which stands at 18 feet is an architectural delight. There are 7 musical pillars in the Alangara Mandapam each cut out of single rock, which emit the sounds of various musical instruments when struck. There are 1035 pillars with carvings in the dancing hall. The Anjaneya or Hanuman statue stands at 22 feet or 3 m and is carved of a single granite block and is one of the tallest statues in India. The Nandi statue, made of mortar and lime and which is 13 feet tall is one of the biggest nandi statue in India.
Links: www.tn.gov.in
1,314 views