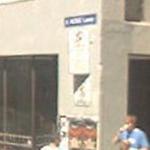 The street was formerly called Corporation Lane, but was renamed on 1 October 2004 as a tribute to Australian rock band AC/DC.
Links: en.wikipedia.org
716 views