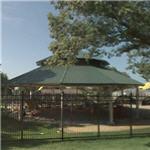 The Over-the-Jumps Carousel was constructed as a traveling carousel by the Spillman Engineering Company of North Tonawanda, New York, during the heyday of carousels in the United States (1887-1935). It first appeared in Arkansas at the 1924 Arkansas State Fair held at State Fair Park, now known as War Memorial Park.

Little Rock resident Tom Fuzzell purchased it in 1942, saving it from destruction and allowing several more generations of Arkansans to enjoy it at War Memorial Amusement Park.

The carousel was placed on the National Register of Historic Places in 1991. Owners Mokey Choate and Doc O’Kelley decided to sell the carousel in 1991, putting its future in Arkansas in peril. Under the leadership of then-State Senator Mike Kinard and other visionary leaders, Friends of the Carousel was formed to raise the funds necessary to purchase and fully restore the beloved carousel.

After more than $500,000 and 16 years of hard work, the Friends of the Carousel donated the Over-the-Jumps carousel to the Little Rock Zoo in October of 2007 making the Zoo the permanent home of the carousel.
Links: littlerockzoo.com
880 views