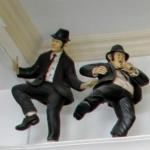 By kjfitz @ 2013-02-10 15:47:06
@ 34.101354, -118.343041
Hollywood, California (CA), US
The Blues Brothers (or, more formally, The Blues Brothers’ Show Band and Revue) are an American blues and soul revivalist band founded in 1978 by comedy actors Dan Aykroyd and John Belushi as part of a musical sketch on Saturday Night Live. Belushi and Aykroyd, respectively in character as lead vocalist "Joliet Jake" Blues and harmonica player/backing vocalist Elwood Blues, fronted the band, which was composed of well-known and respected musicians. The band made its debut as the musical guest on the April 22, 1978, episode of Saturday Night Live.

John Adam Belushi (January 24, 1949 – March 5, 1982) was an American comedian, actor, and musician. He is best known as one of the original cast members of the hit NBC sketch comedy show Saturday Night Live and as the co-star and co-creator of the hugely successful motion picture The Blues Brothers.
Links: en.wikipedia.org
553 views