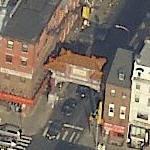 By kjfitz @ 2006-11-30 10:56:38
@ 39.953818, -75.156265
Philadelphia, Pennsylvania (PA), US
The 88-ton China Gate on 10th Street serves as a symbolic entrance for Philadelphia's Chinatown. Painted bright gold, green, blue, and red, it reflects a traditional Chinese architectural style of the Qing dynasty (1644–1912). The gate is adorned with dragon motifs, small sculptures of animals, and ornamental roof tiles, and the stone bases are incised with floral patterns. The overall design was supervised by Sabrina Soong, a local Chinese-American architect. The Philadelphia Chinatown Development Corporation received a grant from the National Endowment for the Arts to support the preliminary drawings. The rest of the American financing was supplied by the City of Philadelphia with the help of fundraising by community residents.

Philadelphia's sister city of Tianjin, China, provided the tiles, and a team of Chinese engineers and artisans built the pieces of the arch. Most of the team members were from the Beijing Ancient Architectural Construction Corporation, which is charged with maintaining historic monuments in and around China's capital, including the Great Wall. Officials from Philadelphia and Tianjin dedicated the gate in early 1984 as a commemoration of the friendship between the two cities and as a tribute to the cultural and economic contributions of Philadelphia's Chinese community. The large Chinese characters on the gate proclaim "Philadelphia Chinatown."