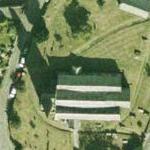 By kkeps @ 2008-12-18 09:39:05
@ 50.440281, -4.412467
Menheniot, United Kingdom (GB)
The church is an early 14th century building with a tower and spire, something not often seen on Cornish churches. The spire was added in the 15th century. The tower contains five bells. The clock on the tower was given in 1907 by General Jago Trelawny after a serious illness. In the church is the earliest known brass in the county. It is an inscription to Sir Ralph Carmynow who died in 1386. The church was much restored in the 1860's. The lychgate is a memorial to Jane Darell Jago, erected by her sister and brothers in 1899. In the churchyard is the tomb of a John Richards Lapenotiere who was the Captain of HMS Pickle at the Battle of Trafalgar in 1805. It was he who brought home to England the news of the Royal Navy's success at Trafalgar and the death of Vice Admiral Lord Nelson. He came to live in Menheniot after he retired from the Royal Navy. He is buried with his wife, Mary Ann and their young son Thomas. The tomb was restored as part of the Trafalgar celebrations in 2005.
Links: www.waymarking.com
442 views