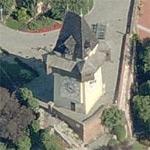 By neotrix @ 2008-03-26 17:02:48
@ 47.074625, 15.437784
Graz, Austria (AT)
A tower on this spot of the hill was first mentioned in the 13th century. When the fortress was reconstructed in the middle of the 16th century, the tower was given its present shape. The hands on the huge clockfaces often confuse people. Is the clock out of order? No. The fact that originally there were only long hands for the hours which could be seen from the distance, and that those for the minutes were added only later caused the "swapping" of the hands. The clockworks, made by Michael Sylvester Funck in 1712, are still working but have been driven electronically since the middle of the 20th century.
Links: cms.graztourismus.at
551 views