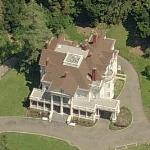 The property was used as a filming location in the 1985 James Bond film, A View to a Kill as the home of the character Stacey Sutton played by Tanya Roberts.
Links: www.dunsmuir.org
1,979 views