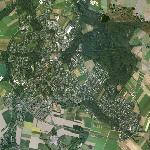 
The Grenzlandring, to many foreigners also known as Wegbergring or Wegberg Ring, is told to be "discovered" nearly undamaged after World War II when during one dark 1947 night, Dr. Carl Marcus (during WWII a double agent for the Nazis as well as the MI6, codenamed 'Dictionary' by them), the town mayor from the nearby city of Rheydt, drove along a more or less straight looking country road. When he passed a bicycle rider more than once, he suddenly realised that this road must be a full circle. In fact, a 9,005 metres (5.595 mi) long and 6.8 metres (22 ft) wide egg-shaped concrete ring road had been built prior to WWII around Wegberg and the neighboring village of Beeck and completed in 1938 or 1939, at total costs of about 3.3 million Reichsmark. As it was intended for military purposes, the construction had not made been public nor was the road shown in maps. Anyhow this story is today regarded as part of a marketing strategy since parts of the ring had been used by US and British military immediately after the war and had in no way been unknown.


Initiated and organised by the silk weaving mill owner and keen racing driver Emil "Teddy" Vorster (Rheydt) and his Rheydter Club für Motorsport (RCM) (from 1949 on the organisation was in the hands of the Motorsport-Union-Grenzlandring, a co-operation of four motorsport clubs of the Lower Rhine region) the first race was held on September 19 1948, in front of about 250,000 spectators, although "just" 100,000 people had been expected to show up. The all-time average lap record was set in September 1949 by the already famous Bavarian Georg "Schorsch" Meier (overall winner of the 1939 Isle of Man TT) on a supercharged BMW 500 motorbike at 216 km/h (134 mph) (clockwise driven) while Toni Ulmen in September 1951 set the all-time record for cars, driving his Veritas 2000 RS to 212 km/h (132 mph) (anti-clockwise driven).


Yet, on August 31 1952, Helmut Niedermayr from Berlin crashed his Reif/Veritas-Meteor Formula 2 at the exit of the Roermonder Kurve at a speed of nearly 200 km/h (120 mph), due to never cleared up reasons, killing at least 13 (some sources even claim a 14th but unknown dead person) and injuring another 42 spectators. Although the actual event was not stopped to avert panic among the crowds racing was subsequently banned from the venue by the government, after a total of four anti-clockwise and only one (in 1949) clockwise driven competitions that had been attended by up to 300,000 people