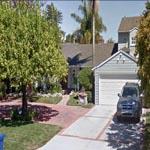 This suburban home in Los Angeles doubled as the residence of Gary's crush "Karen" (Diane Franklin) in the movie.

When Gary (Lawrence Monoson) lets the air out of the tires of Karen's moped, you can see the house, which has been modified since the early 80s shooting, as well as the house across the street.

Please keep in mind that this is a private residence. Please don't trespass on their property, knock on the door, or disturb the residence.
Links: www.imdb.com
1,396 views