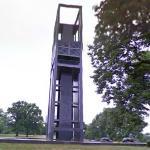 Texts on the memorial:
So many voices in our troubled world are still unheard.