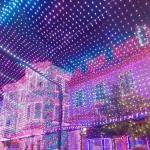 By kjfitz @ 2013-12-30 19:16:33
@ 28.355015, -81.559924
Epcot, Florida (FL), US
The Osborne Family Spectacle of Dancing Lights is a display of Christmas lights and decorations at Disney's Hollywood Studios at the Walt Disney World Resort near Orlando, Florida. Initially constructed by an Arkansas businessman as a gift for his six-year-old daughter, the display has become one of the most popular attractions during the park's holiday season.
Links: en.wikipedia.org
698 views