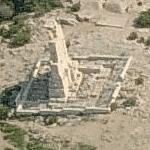 By adrbr @ 2008-02-09 05:23:50
@ 37.967002, 23.722345
Athens, Greece (GR)
The Philopappos Monument, crowning the Mouseion Hill to the southwest of the Acropolis, is the tomb of Caius Julius Antiochos Philopappos, a member of the royal family of Commagene, a small Hellenistic kingdom in southeastern Turkey and northern Syria. The Roman emperor Vespasian annexed the kingdom to the Roman empire in 72 A.D., and the royal family was sent into exile. Philopappos lived in Athens and became an Athenian citizen. He was also a Roman citizen and held several very important offices during the reign of the emperor Trajan, including that of consul. A Latin inscription on the tomb referring to specific titles of the emperor Trajan allows us to date the construction of the monument (and the death of Philopappos) to between 114 and 116 A.D. Since the Athenians allowed him to be buried in this very elaborate mausoleum right opposite the Acropolis -- and within the formal boundaries of the city -- we suspect that he also must have been an important benefactor of the ancient city of Athens.
608 views