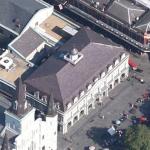 The Presbytère, originally called the Casa Curial (Ecclesiastical House), derives its name from the fact that it was built on the site of the residence, or presbytere, of the Capuchin monks. While intended to house clergy, it was never used as a religious residence. It was designed in 1791 to match the Cabildo, or Town Hall, on the other side of St. Louis Cathedral. The second floor, however, was not completed until 1813. The building initially was used for commercial purposes until 1834 when it was used by the Louisiana Supreme Court. In 1847 the structure's mansard roof was added. In 1853, cathedral officials sold the Presbytère to the city and in 1908 the city sold it to the state. In 1911 it became part of the Louisiana State Museum.

It was declared a National Historic Landmark in 1970.

View of Jackson Square. The Cathedral is the central building, with the Cabildo to the left and the Presbytere to the right.

In 2005, the cupola was replaced atop the Presbytère. The cupola had been missing since the New Orleans Hurricane of 1915.
Links: en.wikipedia.org
432 views