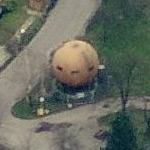 By neotrix @ 2008-06-29 11:01:53
@ 48.215542, 16.396294
Vienna, Austria (AT)
Located in Vienna Prater, the Republic of Kugelmugel declared independence in 1984, after disputes between artist Edwin Lipburger and Austrian authorities over building permits for the ball-shaped house he built at the address. The house is enclosed by a barbed-wire fence and is the only address within the proclaimed Republic. Its address is "2, Antifaschismusplatz" (2, Anti-Fascism Square, 2 refers to the 2nd district Leopoldstadt), and the founder is one of the 389 citizens. Lipburger refused to pay taxes to the Austrian government and began to print his own stamps, for which he received a prison sentence in court. Only a pardon by the Austrian President saved him from going to jail.