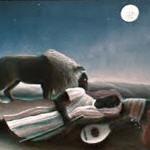 Rousseau first exhibited the painting at the 13th Salon des Indépendants, and tried unsuccessfully to sell it to the mayor of his hometown, Laval. Instead, it entered the private collection of a Parisian charcoal merchant where it remained until 1924, when it was discovered by the art critic Louis Vauxcelles. The Paris-based art dealer Daniel-Henry Kahnweiler purchased the painting in 1924, although a controversy arose regarding the painting was a forgery. It was acquired by art historian Alfred H. Barr Jr. for the New York Museum of Modern Art.

The painting has served as inspiration for poetry and music, and has been altered and parodied by various artists often with the lion replaced by a dog or other animal. In the Simpsons episode "Mom and Pop Art" Homer dreams of waking up in the artwork with the lion licking his head. A print of the work appears in the movie "The Apartment" above the comatose Fran Kubelik.
Links: en.wikipedia.org
547 views